I recieved a review copy of I Had Such Friends from Pantera Press. It is available in bookstores now.

Synopsis
When Charlie Parker dies, it affects everyone who knew him. Everyone, that is, except for seventeen-year-old Hamish Day, the boy who lives on a cabbage farm and only has one friend. But Hamish soon finds himself pulled into the complicated lives of the people left behind. Among them is Annie Bower, the prettiest girl ins school. As he uncovers startling truths about his peers, his perspectives on friendship, love, grief and the tragic power of silence are forever altered.

Meg’s own teaching experience has enabled her to delve deeper into the true nature of a universal high school experience. I Had Such Friends will speak to high school students/teenagers on a personal level, and foster important conversations among Australian youth, school and family culture on issues including abuse, failure and neglect.

The story follows Hamish Day, the seventeen-year-old son of cabbage farmers, following the aftermath of a tragic car accident that killed the golden boy of the small town they live in - Charlie Parker. Charlie doesn’t mean much to Hamish, who has one friend and is frequently bullied by the people who revere Charlie. However, his death is starting point for a journey of self-discovery as Hamish develops relationships with Peter – the perceived delinquent who had nothing in common with Charlie – and Annie – Charlie’s girlfriend, who survived the car accident. It is through these friendships that Hamish discovers his experience of secrets, grief and loneliness are not his alone.

In Hamish, Meg Gatland-Veness crafts a raw and authentic voice. The narration style is accessible and conversational with all the flaws and insecurities of an awkward and not entirely likeable teenage boy on full display. The narrative style is a real highlight of the book. Hamish's voice is distinctive, and the way she uses his observations to convey the intense yet monotonous life of a teenager in a small town is masterful.

Hamish’s observations of classmates and his parents are often one dimensional and, particularly when relating to girls at school, problematic. However, the story does attempt to demonstrate he has a very binary and ignorant perception of the world around him and instead, starts him on the path to discovering the complexities of other human beings. To me this seemed very realistic for a seventeen-year old boy, although I would prefer if this world view had been more explicitly challenged in the text.

The story builds very slowly, adding to the atmosphere of isolation and the intensity of his new relationships and self-discovery. Although the story focuses on Hamish’s developing relationships,a lot of undercurrents run through the story. To me the most interesting of these was Hamish’s family. Gatland-Veness very quietly displays this tragic loneliness; their disconnection from each other and their internal grief.

Other issues raised in the book include abuse, bullying and suicide. While these issues intersected with each other, I felt that to some extent they weren’t given sufficient space or weight in the narrative. The blurb uses the phrase “the tragic power of silence” and I think this is really at the core of I Had Such Friends. Some of the other tragic aspects weren’t really explored or fleshed out, but the impact of silence was a clear and compelling theme. This is especially the case of Hamish’s family. I would have liked to see even more of the family dynamic and those relationships explored.

Overall, I Had Such Friends is an emotional and gripping story about self-discovery and grief that is worth reading. 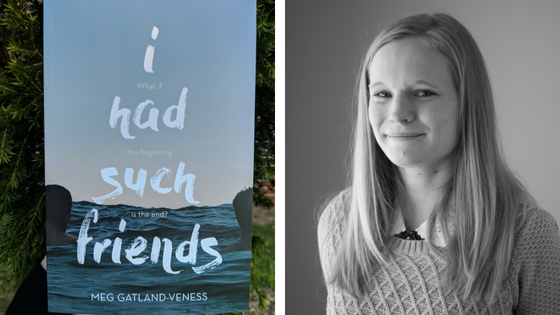 Author
Born in a small country town called Milton, she grew up on the Central Coast before attending the University of Newcastle to study a Bachelor of Arts, majoring in English and Drama, as well as a Bachelor of Secondary Teaching.

When she's not writing novels, she channels her unending creativity into choreographing and directing musicals, writing poetry, singing and ballet, as well as playing tennis, volleyball and soccer.

Meg currently workds as a Drama teacher on the Central Coast of NSW, which engables her to cature the modern-day AUstralian teenage experience.