This book was sent to me for review from Walker Books Australia. It will be released September 12 in the US and in November in Australia

National Book Award winner M. T. Anderson returns to future Earth in a sharply wrought satire of art and truth in the midst of colonisation. A perfect novella-length satire for young adults and adults alike.

Landscape with Invisible Hand is set in the near-future and aliens called the vuvv have effectively colonised earth. The advances in technology and automation were welcomed by earth's leaders. However, the new world is not prosperous to humans as promised. As automation takes over, Adam's parents lose their white collar jobs, and the family's situation quickly deteriorates into a struggle for survival. Adam is an artist, and his exploration of his art is inextricable to him working how he imagines the world could be and coming to terms with how the world is. 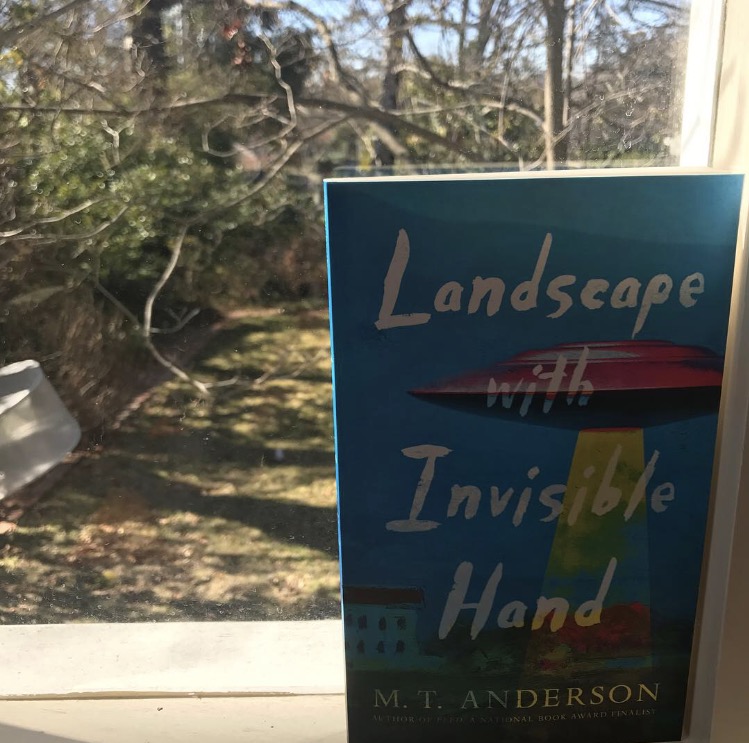 I had been told this book was excellent. On my recent trip to Canberra, I took this book along, intending to pass the four-hour train ride with an enjoyable reading experience. I finished it within the first hour (I am a fast reader, but Landscape with Invisible Hand is also more novella than novel). It is a slim book that utilises space with precision; it is also utterly consuming.

Sharp. Satirical. Grim. Beautiful. Each chapter is only a few pages long, a brief yet vivid image of the world Anderson created. The world is fully realised and completely believable, the characters, complex snapshots of fully-formed people. All this is pieced together through incredibly skilled writing.

In Landscape with Invisible Hand Anderson paints (almost literally) a vivid picture of alien colonisation. It’s a little surreal that such beautiful writing is so often describing literal shit. Anderson describes Adam's artwork with the same dexterity as his gastrointestinal problems.

While Landscape with Invisible Hand is set in the future, and centres around alien colonisation, it is powerful in its indictment of the world now. What occurs is colonisation, not invasion. The impacts are so believable, it is abundantly clear that the current configuration of globalisation means we are on this path already. Growing inequality; the desperation of the, increasingly numerous, people out-of-work; inability to access basic healthcare (while the rich continue to grow exponentially more wealthy) is a story shared across the world today. There are also many powerful parallels with colonial history, particularly the commodification of Indigenous peoples' culture, appropriation of resources and destruction of land.

I recommend reading this book because it is beautifully written. Because the world building is strong and believable. Because I think it is important to feel the emotions Anderson's imagery invokes in us.