I received a copy through NetGalley in exchange for an honest review. It will be released February 6 in the US and February 13 in Australia

The Belles is a highly anticipated new YA fantasy written by Dhonielle Clayton. None other than Roxanne Gay has praised her as "a whipsmart writer with grand, grand talents". Aside from praise for the book, Dhonielle Clayton is already someone whose work interests me. I've followed her on Twitter for a while now and she has lots of smart and interesting things to say. So even without the hype, this book would have gone on my TBR (I've been meaning to read her other work). I was expecting to really enjoy this book and it surpassed all my expectations.

In the opulent world of Orleans, the people are born grey and damned, and only a Belle's powers can make them beautiful.
Camellia Beauregard wants to be the favourite Belle - the one chosen by the queen to tend to the royal family.
But once Camellia and her Belle sisters arrive at court, it becomes clear that being the favourite is not everything she always dreamed it would be. Behind the gilded palace walls live dark secrets, and Camellia soon learns that her powers may be far greater - and far darker - than she ever imagined.
When the queen asks Camellia to break the rules she lives by to save the ailing princess, she faces an impossible decision: protect herself and the way of the Belles, or risk her own life, and change the world forever.

The Belles is exquisitely crafted. It's a book filled with lush description and intricate detail, like a garden wonderland or ornate tapestry. Through the meticulous world-building, particularly in the first few chapters, she skillfully creates the anticipation that comes with discovering a new fantasy world. I love the hint of confusion you feel as a reader as you discover how things work in a different world. Clayton reveals information and builds with slow, painstaking detail that sucks you into an elaborate and exhilarating story.

Camillia is a fabulous character. She is intelligent and highly ambitious. She holds a deep sense of satisfaction in her work, which she sees as more of a calling. Despite her commitment to the work of the Belles, she is capable of questioning and challenging her own understanding as she learns new information and different perspectives. I particularly loved that it took me a little bit of time to work out how much I liked her. She was so real, full of both tenacity and empathy. Her love for her sisters is deep and genuine despite their competition and her own ambitions. Their sisterhood was a particular highlight of the book. 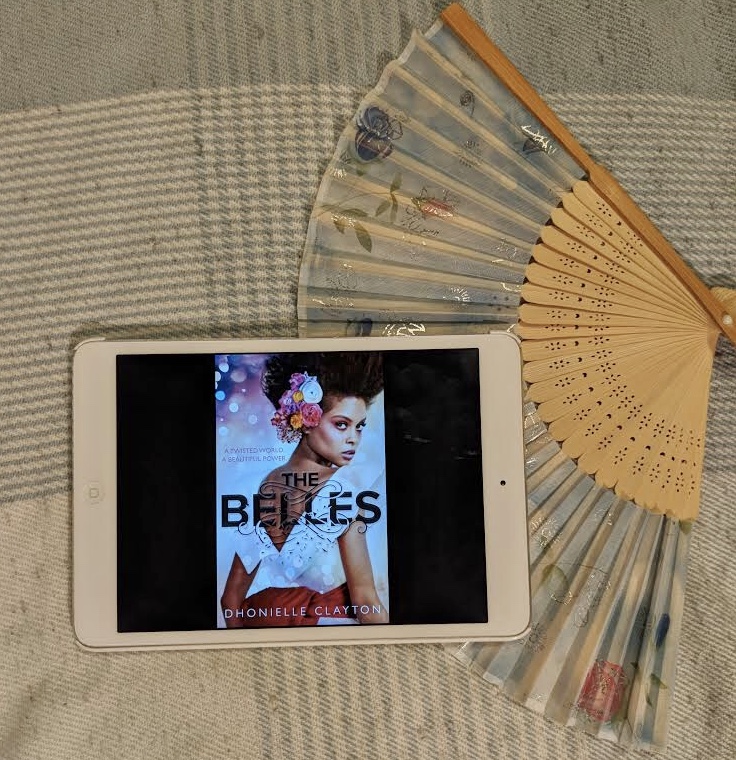 One thing I particularly liked about The Belles is the way Clayton explores the theme of beauty through the story. In some ways it is not at all subtle, the entire premise of the world is build upon the concept that people need to be beautiful and how it works as a commodity that exploits and is exploited. But throughout the story you don’t so much think about it as feel it.

As you dive into this glittering and decadent world of Orleans you can’t help but feel a little uneasy. The darkness is a slow bleed, seeping out as the narrative progresses, and as more is revealed about the complexities of world the Belles inhabit. As Camillia discovers the world outside her limited childhood, she takes the reader with her. The unease and growing questions escalate, culminating in an entirely unexpected twist. The slow build at the beginning and accelerated pace at the end of the narrative create an intensity that enhance the whole reading experience.

Going in, I had no idea this was going to be a series. I didn't really think too much about it, but I had a vague sense of expecting the story to wrap up by the end of the book. Usually, I hate expecting a standalone and discovering there are more books. I like to know how long a story might take, even if it is just a sense of there being multiple books. About three quarters through The Belles, I rather desperately needed there to be more story and was very pleased to find out there will be.

Overall The Belles is an exciting and imaginative fantasy that you won't regret diving into.